Reverend Sarah Jones is a transgender priest, singer, songwriter, and public speaker. Now based in Cardiff, she was the first person in the UK to have made a gender change and then be recommended for training for ordination by the Church of England. More recently, Sarah was awarded a 2021 Attitude Pride Award by the leading UK-based gay magazine Attitude for her leadership in the trans space.

As we wrap up our Pride month celebrations, Reverend Sarah Jones’ talk is particularly timely, noted Andy Lloyd, Director of Brand, Marketing and Communications at The Hopper, as he introduced the session. “Worldwide, there is an alarming rise in hate crimes against members of the LGBT+ community, increasingly anti-gay rhetoric, and legislation being pushed by populist governments on our doorstep in the EU,” said Andy.

These issues matter deeply to us at Tech Co. and the BID Committee is currently setting-up an LGBT+ employee group to promote inclusion, allyship and diversity. It’s more important than ever to learn about different perspectives, and we feel incredibly privileged to hear about transgender experiences from Sarah. 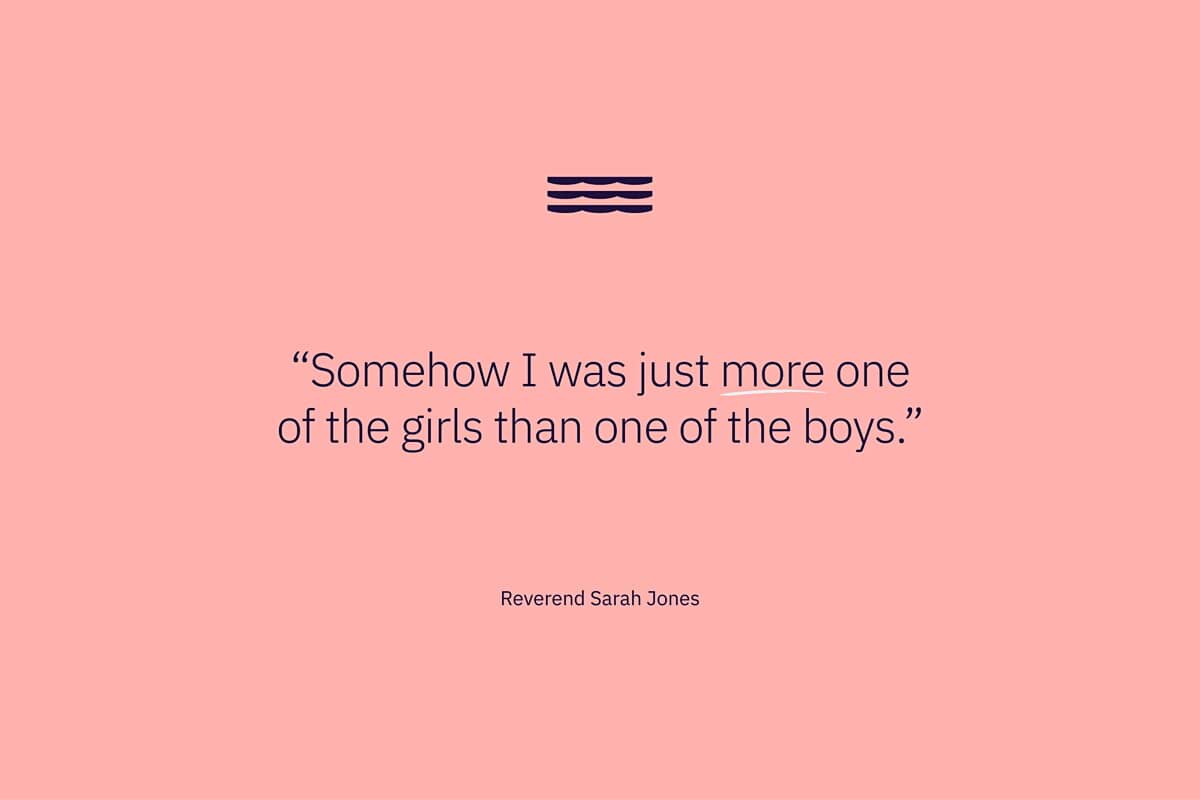 As an only child, Sarah Jones didn’t mix with other children that much before starting school. “But as soon as I turned up in primary school, somehow I was just more one of the girls than one of the boys,” she said. “When we were divided up, I stood with the boys, because I'd been classified as a male at birth.”

As she continued through school, Sarah knew she was different but was perfectly happy. “I just thought there was a bit of femininity in me somewhere, I didn't think it would be the biggest issue of my life,” she says.

She later got into a relationship with a woman, who she ended up marrying. “We had a very happy two or three years,” said Sarah. “But this thing inside of me just kept growing, and it got in the way.”

One day, her wife sat her down to tell her the marriage was over. “I love you,” she told Sarah. “But this is like living with another woman. And I'm not a gay woman, so I don’t want that.” 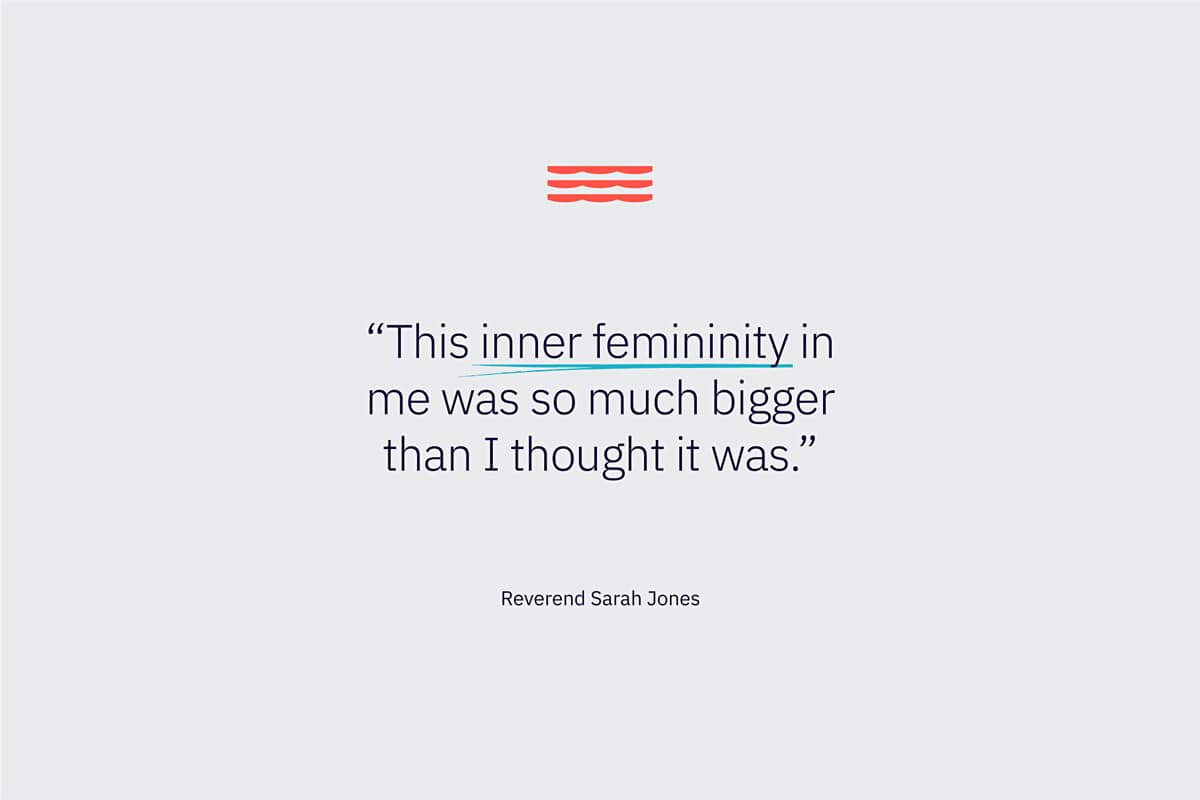 Sarah was devastated. She had been doing counselling, but had always told her therapist she wanted to keep conversations about her femininity in a box. “But when my wife left, I said to my counsellor, ‘let's unpack the box,’” said Sarah. “Within two or three weeks, I was in a completely different space. This inner femininity in me was so much bigger than I thought it was.”

Over the next nine years, Sarah tried to figure out who she was. She wondered whether she might be transvestite, but realised that she wasn’t. Then she wondered if she might be gay and ended up in a long-term relationship with a man.

“And then one day, he sat me down, saying this relationship has got to end, because it feels like I'm living with a woman, and I'm a gay man,” said Sarah. “It was exactly the same conversation I'd had a number of years earlier with my wife.”

With another relationship over, Sarah started to question herself again and wondered if she might be androgynous. She left her job at a bank so that she could explore bouncing between the gender lines, which would have been unacceptable in a corporate job in the 1980s. 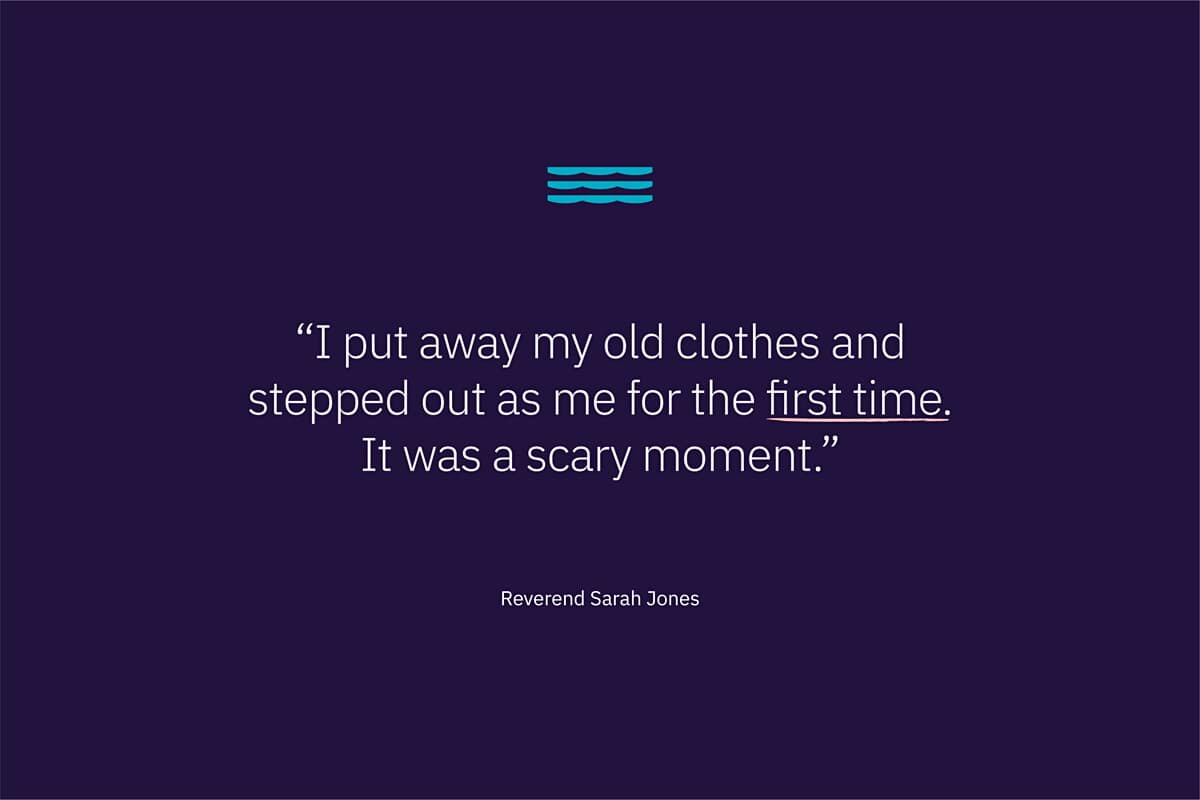 But being androgynous was exhausting, because that wasn’t who Sarah truly was. Before enrolling at university as a mature student, she gave herself three months to explore being a woman. “I put away my old clothes and stepped out as me for the first time,” said Sarah. “It was a scary moment. I went into the city centre and I walked around as me. But once I had settled into it after a couple of days, nobody took any notice of me at all. It just fitted.”

When Sarah told friends and family, some were more understanding than others, but she was able to get on with her life and finally embrace her true self.

The calling of the Church

“I'd always felt a call to ordination, that I might be called to the priesthood,” said Sarah. “And I thought I'd blown it because of making a gender change. Let's face it, institutional religion, and certainly the Christian church, is not known for being a bastion of diversity and inclusivity, is it?”

When she offered herself for ordination in the Church of England, she told them about her background during the first interview. “They gulped a bit and they said they didn’t know what to do, but that they’d work it out,” said Sarah. “Eventually they decided that being transgender didn’t mean you couldn't be in ministry and I got through the process. 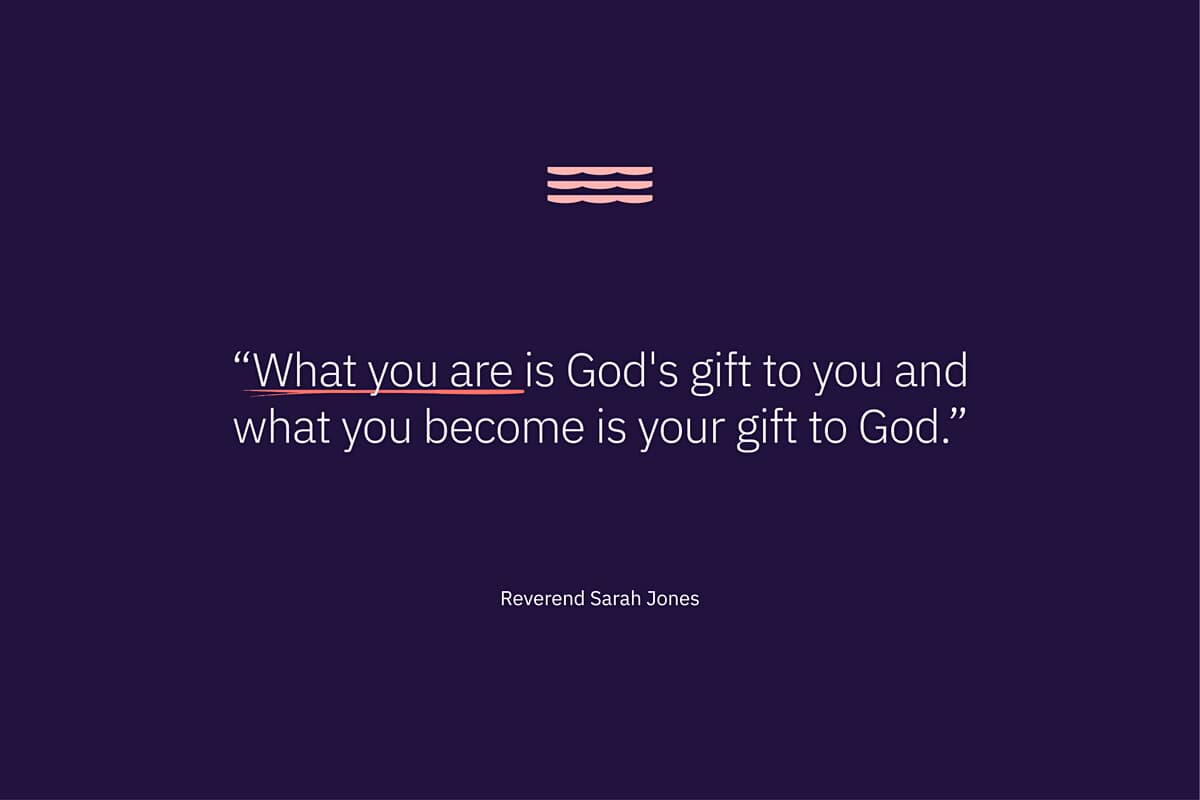 Sarah admits that during those nine years of thinking things through, she’d asked herself whether what she was doing was sinful. “If I really thought that God had made me a man, do I have any license or ability to change that?” said Sarah. She sought spiritual guidance from various retreat centres. One very old priest took a while to think about her predicament. Then, during their final conversation he said, “What you are is God's gift to you. And it strikes me that what you become is your gift to God.”

His words have stuck with her ever since. “If you really feel you need to make a change, maybe that's what you need to do in life,” she said. “And if you do, maybe you'll flourish and be able to give more to society. You can also strip the religion out if you like: what you are is the universe's gift to you and what you become is your gift back.”

After becoming a vicar, a journalist of a national newspaper got in touch and threatened to ‘out’ Sarah. Their story never went to press, but the fear of it doing so put an immense strain on Sarah, so she and the Church decided in 2005 to issue a press release about the fact Sarah is trans.

“There have been times when I've been well supported by the Church and times when I have not,” said Sarah. “Every now and then I get very heavily criticised by conservative Christians.” 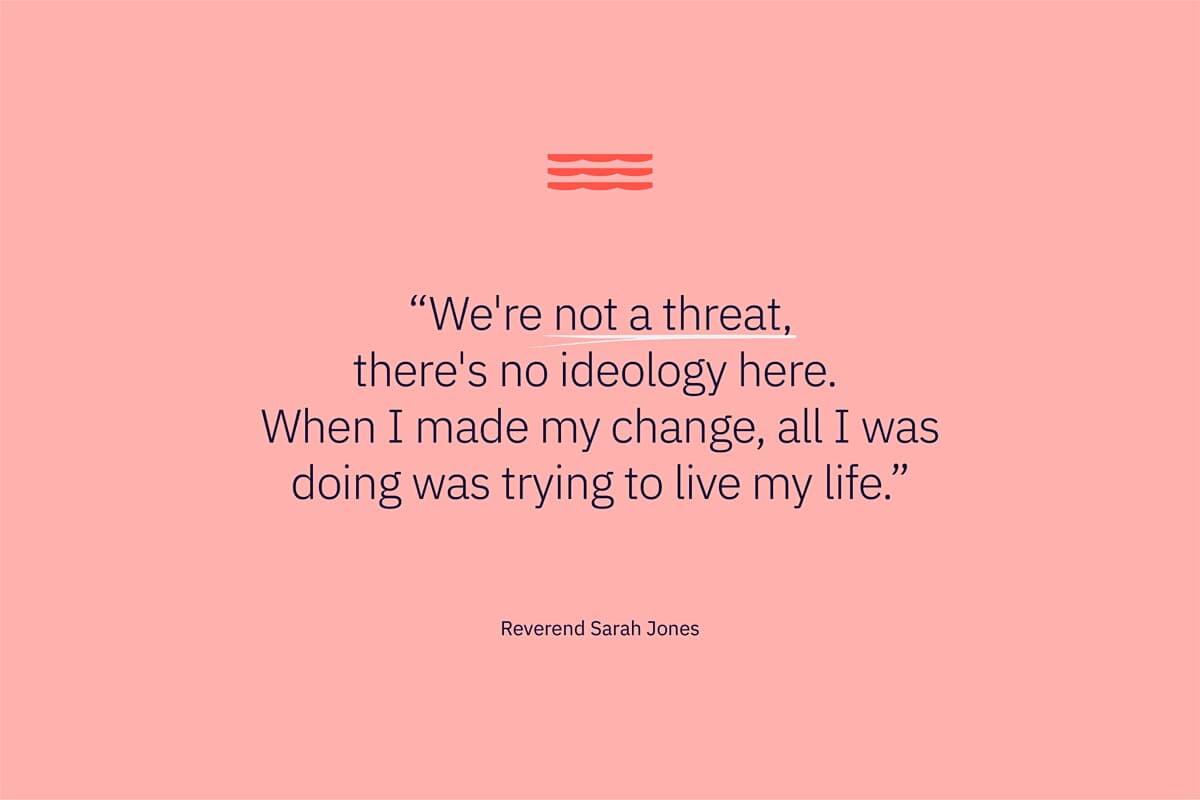 The public have been mostly supportive of her, too. Although of course, Sarah finds the broader anti-trans backlash difficult to take or understand. “We're not a threat, there's no ideology here,” said Sarah. “When I made my change, all I was doing was trying to live my life in a way that enabled me to live it. That's all. It wasn't a movement. And if you make a gender change, you don't make it lightly.” 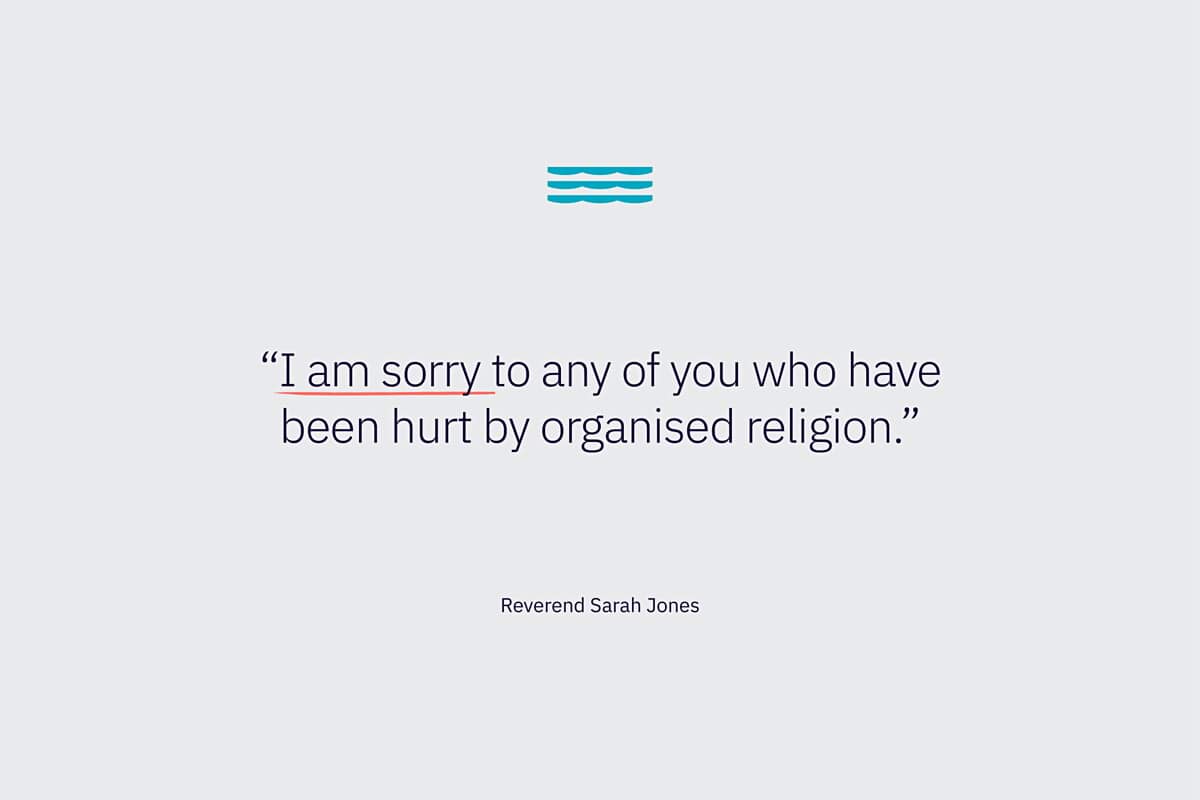 Before ending our session, Sarah was keen to make one final point. “I am sorry to any of you who have been hurt by organised religion, because I meet a lot of people who are genuinely upset by the fact that they're being made to feel like God would not love them,” said Sarah. “And I just want to say if that's how you or anyone you know has been made to feel, I am sorry and there are a bunch of us in the Church working for inclusion.”

We’re The Hopper - an incubator focused on helping our tech industry clients realise their goals. We provide resources including brand and project management, marketing and IT. We're proud to support women, LGBT+ and those from diverse racial, cultural or neurological backgrounds to reach the positions they deserve in the tech industry.

Visit www.thehopper.tech to find out more.