When you visit this website, it may store or retrieve information on your browser, mostly in the form of cookies. This information might be about you, your preferences or your device and is mostly used to make the website work as you expect it to. The information does not usually directly identify you, but it can give you a more personalized web experience. Because we respect your right to privacy, you can choose not to allow some types of cookies. Below is a list of different categories of cookies that may be set and that you can freely change. However, blocking some types of cookies may impact your experience of the site and the services we are able to offer.

For our inaugural Speaker Series event and to celebrate Black History Month, we wanted to reflect on structural racism and why black British history matters.

For our virtual fireside chat, we welcomed British-Nigerian TV presenter and Professor of Public History at University of Manchester David Olusoga OBE to share his perspective. Summarised below, he explained the roots of racism and why now is the time to get comfortable with having uncomfortable conversations.

Renowned historian and BAFTA-winning filmmaker David Olusoga OBE hasn’t just spent his career researching and documenting racial injustice, he has lived through it.

Born in Lagos, Nigeria, Olusoga moved to the UK with his mother following his parents’ split. In their area – the overwhelmingly white and working class northern town of Gateshead – organisations like the National Front had a strong following.

Racial violence was ubiquitous and tolerated. When Olusoga was a teenager, his family were repeatedly attacked in their home by people throwing bricks and smashing through their windows.

“It takes a powerful idea to convince someone that [behaviour like that] is the right thing to do,” says Olusoga. “The ideas of race, racism, inferiority and supremacy were played out in my life. Understanding these forces has never been a purely academic exercise – I’ve needed to understand what leads people to think they are appropriate and even moral.”

Driven by this desire to make sense of his experiences, Olusoga has made multiple BBC documentaries, such as Black and British: A Forgotten History and Britain’s Forgotten Slave Owners, written several books and given multiple talks and lectures on black history, empire and slavery.

But even someone with his level of expertise couldn’t have predicted the anti-racist uprising of 2020. “If somebody had told me at the start of the year that millions of young people across the world would organise thousands of demonstrations in the name of anti-racism, I would have thought they’d been dreaming,” he says. “That’s not to say we have become an anti-racist society overnight. We have just begun to hear each other."

Olusoga believes it took a pandemic for people to listen. With life ground to a halt, turning down the usual noise, the voices of marginalised people were heard.

The British media has always tended to present racial injustice as an American problem, and its coverage of George Floyd’s murder was no different. However, people’s reactions to this narrative were different this time. Black British citizens were vocal about the parallels between police brutally in America and the UK and called out the media for gaslighting their experiences.

“The normal ways of marginalising the suffering of black people didn't work in this new environment,” says Olusoga. “The sense of disgust in rection to the video of George Floyd’s murder combined with this radically new environment created a chain reaction.”

A generation comes of age

He believes that another critical element behind the stepping up of the Black Lives Matter movement in 2020 is that a new, politically charged generation has come of age.

“My view is that this generation has done much more than my own,” he explains. “I’ve spent my time going on panel shows and making documentaries complaining about Edward Colston’s statue; they have torn it down. So, I feel that this is a moment to listen to younger people.”

Young people today often have radically different ideas to their parents about race, as well as on topics like Brexit and climate change. This, Olusoga believes, is a reason to be optimistic.

Throughout history, big generational gulfs in attitudes have led to enormous change. The last time it happened in the UK was with the counterculture movement of the 1960’s. But perhaps the most striking example is what happened in Germany following World War II, when young people challenged and fiercely condemned their ancestor’s compliance with the Nazi regime.

He believes that the two big ideas that millions of people absorbed for the first time this summer are anti-racism (not being racist means proactively fighting racism) and the idea of allyship.

“Drawing the poison of racism from our society can’t be the task of black people alone,” says Olusoga. “Three quarters of people in the UK claim they want to live in a society where race plays no part in people's life chances. This is something we need to do together.”

Allyship means recognising the fact that race is an idea. “Racism is structural because it was constructed,” says Olusoga. “We don't teach the story of race, how it evolved, how it shapes the world and how we have built systems on it. We've entirely normalised these systems. And because we don’t think of race as an idea, we don’t go looking for its authors and architects."

Those authors and architects were, he explains, the slave owners of the 17th to 19th Centuries. They created a system of ideas, stereotypes and presumptions in order to justify slavery and the dehumanisation of black people. The ideas become embedded in culture, passed on and kept alive through our literature, music, fashion and language.

“The stereotypes invented by the plantation owners, such as that black people are savage, violent and innately more physical, are still with us,” says Olusoga. “Another presumption was of black simplicity, childishness and a lack of analytical intelligence. Again, if you look at expectations and attainment levels of black children in British schools and universities, it’s clear that we are more comfortable with the idea of black intellectual failure”.

While the libertarian view might claim we have total control of our thoughts and opinions, we know that’s not how the human brain actually works. “We are shaped by the societies that we live in,” says Olusoga. “That's how structural racism embeds itself.” 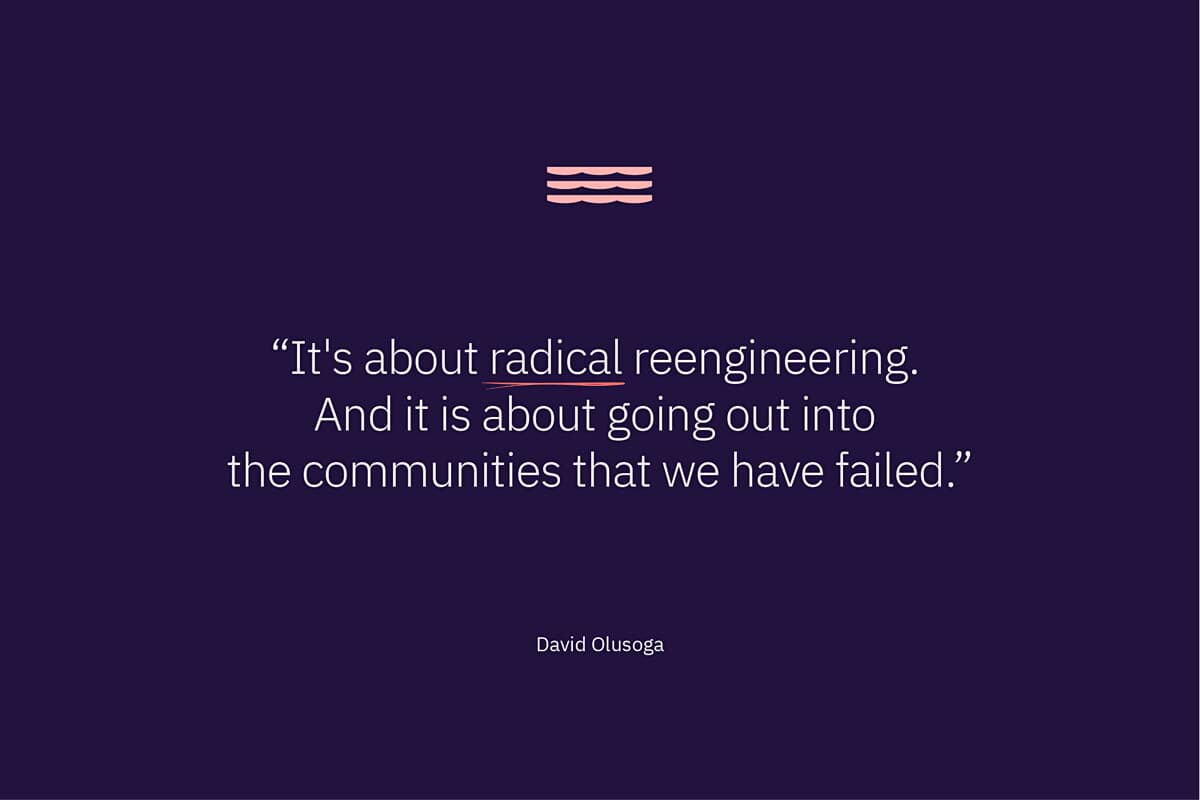 So what can companies like ours do to address structural racism and inequality in the workplace? For Olusoga, businesses have to start by having difficult conversations. These will be challenging for everyone involved. On the one hand, it asks black and brown people to talk about how race operates within their organisations and confront their superiors about the issues they face.

It then requires senior management to not take their feedback personally, become defensive or brush it off. This can be difficult for them, as according to the self attribution fallacy, often the more power people have the less they doubt themselves and the less they understand the disadvantages that others face.

We need to go into these conversations with a degree of compassion, particularly when it comes to the language that we use. “When we impugn people for using certain words, we think that it must mean something about them. But it should be about intent and sometimes we need to give someone the benefit of the doubt, at least once.” A little tolerance for human clumsiness will go a long way.

“But the most important thing,” says Olusoga, “is for those conversations to lead to a proper and painful examination of practices. I don't want to use this platform that you have very kindly given me to say it’s about a few training schemes and initiatives. It's about radical reengineering. And it is about going out into the communities that we have failed.” 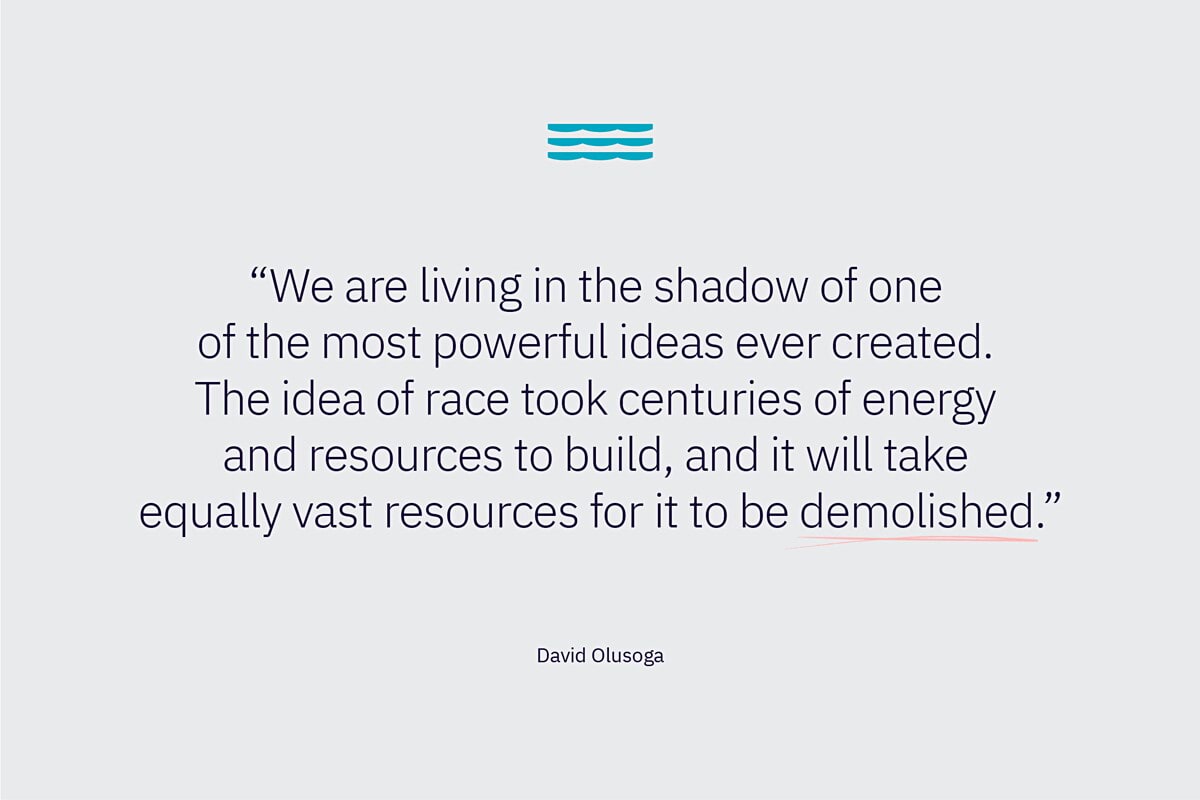 In practical terms, this could mean sponsoring black people through universities, paying for bursaries or going into schools with disadvantaged students and fast tracking them into company roles.

“We are living in the shadow of one of the most powerful ideas ever created,” says Olusoga. “The idea of race took centuries of energy and resources to build, and it will take equally vast resources for it to be demolished.”

We’re The Hopper - a new tech incubator helping startups at the seed and pre-seed stage, across ideation, incubation, and acceleration. We’re especially keen to close the funding gap for female-founded and female-led startups, but equally open to hearing from anyone with a great idea.

Visit www.thehopper.tech to find out more.